Gifts for my nephews and niece

Eliot was born on October 2nd 2005. The first gift I made is a cradle. I spent some time looking for a pattern on the internet, I had never done any woodworking before so I needed something simple enough, I also wanted it to have an "heirloom" look. The pattern I chose comes from WoodcraftPlans .

My Mom made a very beautiful baby blanket (the third one, with the rabbits), in patchwork, that will look great on the cradle.

The second gift is a crochet blanket (winters are cold in Paris), you will find it at the end of the page.


Wood used :
I used poplar for the bottom, posts, brakets and stretcher, oak for the spindle, rails and plugs, pine for the head and foot boards. The pine is not pretty but I couldn't get a wide enough piece of poplar to fit the pattern and I didn't think I could manage a glue up.

Finish :
I used an American cherry stain and Danish oil.

I gave the cradle to Sylvain and Stephanie in August (we packed it flat and the Continental guy was nice enough to waive the $80 fee for oversized boxes). I wanted to do something else that they would get only the day the baby was born since I couldn't be there so I browsed through the crafts books at Borders and decided to try a crochet blanket.

My mom and grandma had taught me the basis of crochet when I was a kid, however it was long gone...I had to start from the beginning and found a good book, The Crochet Bible by Betty Barnden. Her descriptions are simple enough to follow and her choice of colors isn't cheesy like in the majority of crochet books. The stitches are grouped by type and it is color coded, it makes it even easier to find the stitches you are looking for. I wanted an arcade stitch and a raised stitch, I chose the raised pineapple. I used Lion Suede yarn in olive and cream that I found at Michaels and Hobby Lobby.

Of course I got a wrong stitch count here and there, usually when I switched colors, because I'm never quite sure where I need to pick or turn, but no big deal, I'm happy with the result.

I found this rocking horse pattern at WoodcraftPlans again. It is a small rocking horse for toddlers. Dominique and I made it in pine. Eliot loved it! Next year I will do something less bulky ;^p

Arthur was born on October 16th 2007. I made him a blanket and a matching turtle:

I bought 2 Bucilla's kits to make felt Christmas socks. My mom made the one for Eliot and I made the one for Arthur. These kits are great, everything is included and the instructions are clear.

Lovely Perrine was born on August 16th 2009. I made her a blanket and a crochet turtle.

My nephew and godson was born in July 25th 2010. I made him a crochet blanket, a crochet lamb, and a gourd rattle. 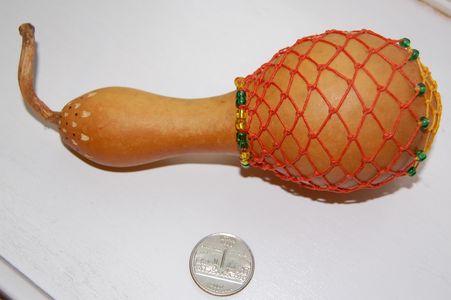 It took some collective thinking to find an animal for each letter (in French of course). I found examples on the web for a lot of them, and drew the missing ones. Each letter has a magnet embedded in the back.
aligator, baleine, chameau, dauphin, elephant, furet, girafe, herisson, iguane, jaguar, kangourou, lion, meduse, naja, oie, perroquet, quetzalcoatl, rhinoceros, souris, taureau, urubu, vache, wapiti, xoxo, yack, zebre.
Ok, I grant you that 'xoxo' is not an animal. If you find a french animal name starting with an X, send me an email.

For Marion I decided to use my brand new sewing machine and she got a turbulette. I found the pattern at Les Moutons de Kallou.

She also got a glow-in-the-dark mobile for her crib.