Kumihimo is an ancient Japanese braiding art and a stricking example of the aesthetic beauty of Japanese crafts. The braids are still used as ties for yukata and kimonos, and sageo for katanas. I learned how to braid on three looms, the Marudai and the Takadai with Giovanna Imperia and the Ayatakedai with Matsushima san.

Cords are an intrinsic part of Japanese culture, their usage as well as the manner in which they are made have evolved over time. The braiding techniques were first introduced from China alomg with Buddhism. During the Heian period (794-1192) elaborate kumihimos were found in buddhist shrines, often braided by monks, their pattern and colors carried different religious meanings. Later kumihimo braids were found on formal court dresses (sokutai).

During the Kamakura period (1192-1333) the braiding art boomed with the essort of the Samurais, it is said that one armor would use 250 meters of cords to tie all the metal plates together, and cords were used also for the horse's armor. The cord used to tie the many small plates (kosaneita) of the armor is called 'odoshi-ito' 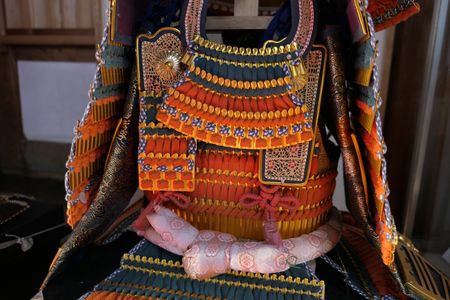 In the Muromachi period (1336-1573) cords were also used to tie tea bags, the intricate knot (musubi) serving as a lock, preserving the integrity of the tea from assasins. It was impossible to re-do the knot in the exact same way after poisoning the tea. You can still see these knots during tea ceremonies. 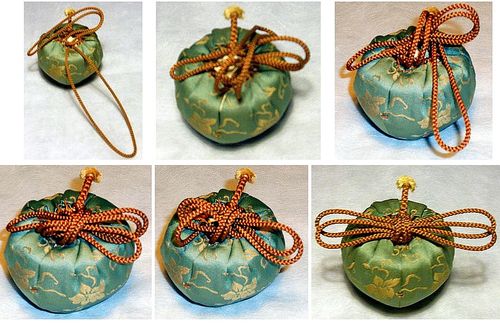 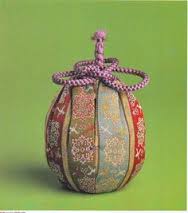 The braiding techniques were secret, the first publications appeared in XIXe century, in the Edo period. Scholars like Makiko Tada or Masako Kinoshita study ancient braids to rediscover how they were made, and adapt the patterns. The braids below are reproductions of famous ancient braids done by Domyo Kumihimo School in Tokyo: 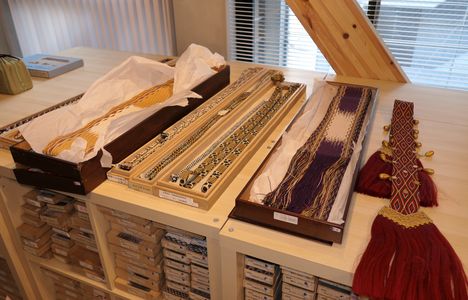 Initially the braiding was done by hand, a technique called 'kute-uchi' that can be found in many cultures around the world. Loops of thread are exchanged between hands and fingers, crossing in a way that forms the pattern. For some patterns several braiders were required. At some point in time the clever artisans introduced braiding material (see below) that made it possible to braid complex pattern without help.

Antique braids can still be seen in temples, like Mitake where we can see a beautiful ryomen-kikko-gumi as well as the famous 'mitake' pattern. There aren't that many left, kumihimo are utilitary objects mainly, made with fragile fiber afterall. Some can be seen as treasured items in temples such as Shosuin and Horyuji.

With the law banning the wearing of swords in the Meiji period, 1868-1912 the production of kumihimo showed a sharp decline. In our modern era kumihimos are used as ties for kimono and yukata as well as accessories. Kumihimo are also used by martial artists to tie the katana to the waist, they are called sageo. Most of the kumihimo found for sale today are machine made, however many braiders around the world and in Japan continue to braid, study ancient braids and develop new braiding techniques.

The fiber used is preferably natural: coton, hemp, and silk. Braiders like Giovanna Imperia use metal thread and others use horse hair. Obijime are mainly silk, a specially prepared silk. A cheaper alternative is nylon embroidery thread, but it is much more slippery and doesn't hold its shape the same way. The silk is specially prepared for kumihimo. The raw silk is carefully cleaned, divided and measured in a process called 'itowari'. The image below has been taken in Maezawa-san's workshop in Iga: 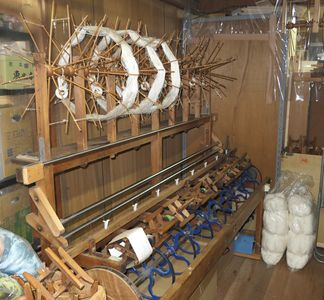 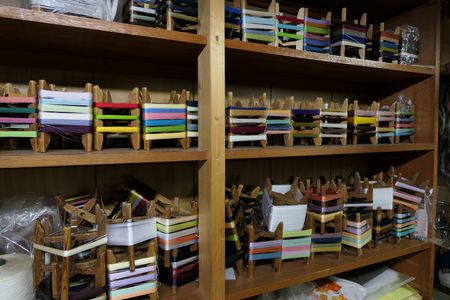 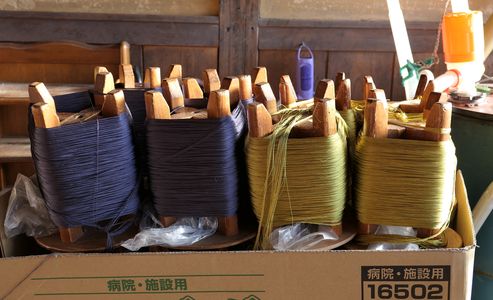 Finally the threads are grouped and twisted together (yorikake). The image below has been taken in Maezawa-san's workshop in Iga: 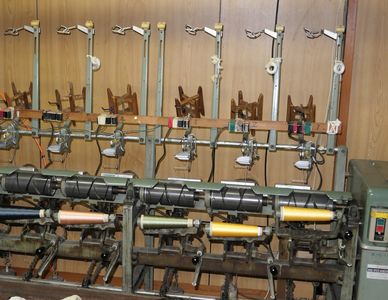 Bundle of threads are attached to a weighted bobbin called 'tama', it insures even tension of the thread. 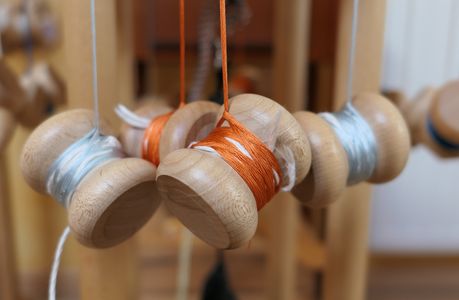 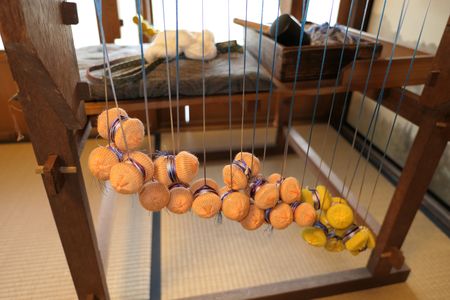 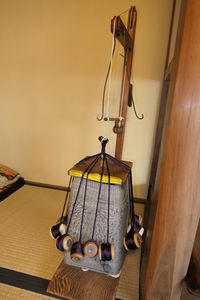 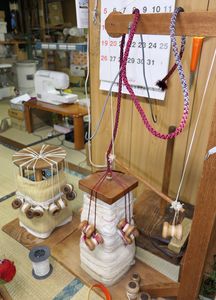 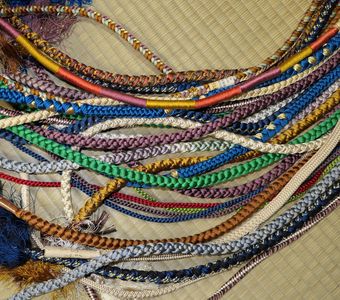 The kakudai is a square stand, as its name implies. The braid is formed upward and each bundle of thread is twisted, resulting in a tight braid with round edges. 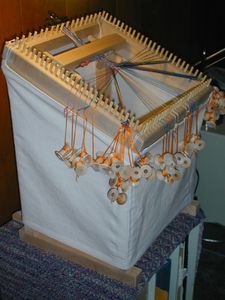 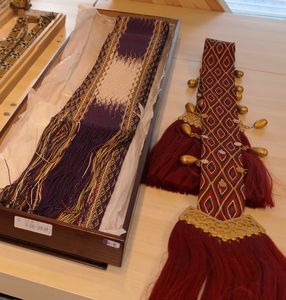 The frame is square, with komas (pegs) all around. The braids presented above are reproductions of ancient braids made at the Domyo Kumihimo School in Tokyo. The braids have a distinctive diamond pattern, you can find more pictures on Weaver's Hands website. 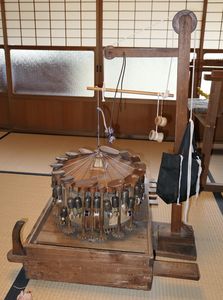 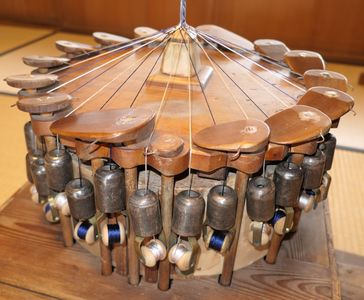 The Naikidai, also called 'gacha-dai' for the sound it makes, is semi automated. One working example (pictures above) can be seen in Matsushima san's studio in Iga. The braider moves a handle back and forth, actioning gears that in turn move wooden pieces with metal hooks. The hooks grab the threads and release them in a different location around the circle. Seeing it live and actioning it myself was a treat! Indeed it is loud! The clever design appealed to my engineer mind but I need the manual and meditative aspect of braiding more. 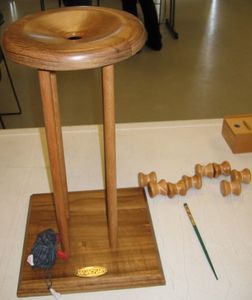 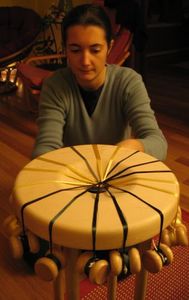 The Marudai stand consists of a round wooden piece with a hole at its center, called the mirror, mounted on 4 legs. The braider sits or kneels in front of the stand and moves threads weighted with bobbins (the tamas) over the mirror. The braid is formed downward, as opposed to the kakudai. Different patterns call for different weights and more tamas. A bag full of weights (marbles, fishing weights) is attached at the starting point of the braid to counterbalance the weigth of the tamas. The weight in the bag depends on the combined weight of your tamas, basically you want your point of braiding to be at the top of the hole, to get a firm braid.

The weaver moves the tamas on top of the Maru-Dai, crossing the threads in a predefined pattern, the weights produce the tension necessary to form an even tight braid. This is very rhythmic, very peaceful.

The braids created on the Marudai have a small diameter with a polygonal section (the section shape depends on the pattern used).

Many braiders also incorporate beads in the pattern, sometimes even to the point of completely hiding the tread. My preference goes to plain braids, or only a few beads on the side as highlights, the braid itself is definitely the focus for me. 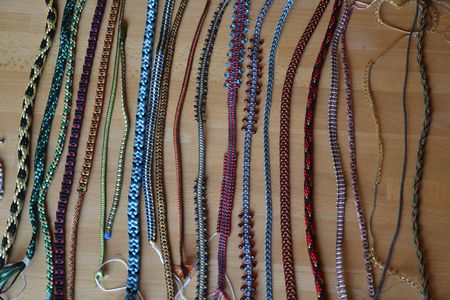 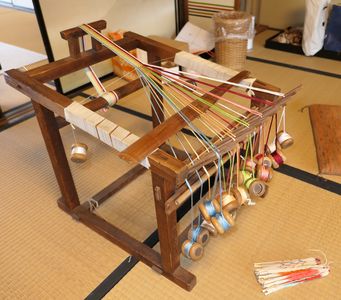 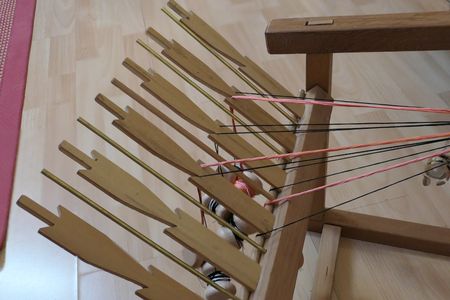 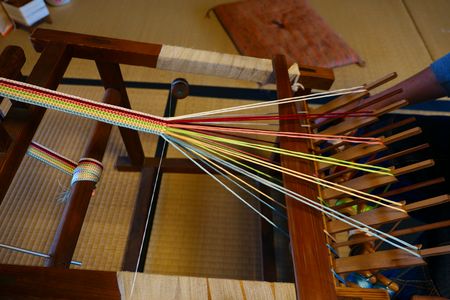 The ayatakedai can be considered a weaving stand rather than a braiding stand. The braid progresses in line, with 2 bundles of threads acting as weft. The bundles of threads are twisted, like for the kakudai, and placed on wooden pieces that resemble arrow feathers. The threads are exchanged between the notches on each feather. A bamboo sword 'tou' is used to press the stitches firmly. 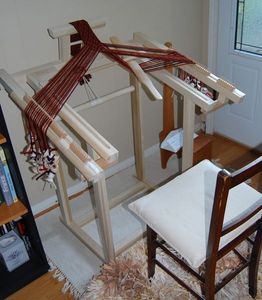 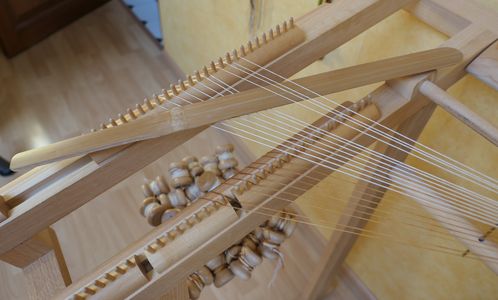 The Takadai is a large frame in which flat larger braids are created in a process similar to weaving, but with more flexibility in the pattern than an occidental loom. The braiding progresses in a triangular shape, as opposed to a straight line for weaving, and there is no weft, or rather any thread can become a weft at some time in the braiding

The width of the braid depends on the number of threads, and is limited by the width of the torii, the wooden rod at the top of the Takadai. As with the Marudai, the threads are attached to weights (the tamas), that take care of the tension. The threads are woven following complex patterns, and a wood sword is used to press the threads in place. The weighted threads are placed on the arms of the takadai, kept in place by pegs(komas). Some patterns are made using one arm on each side, others are using the 4 arms. 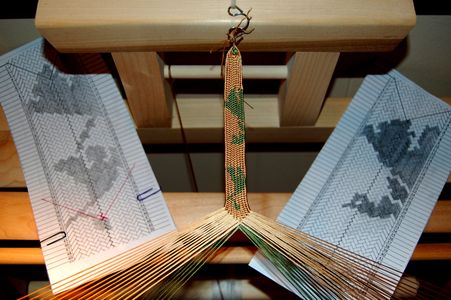 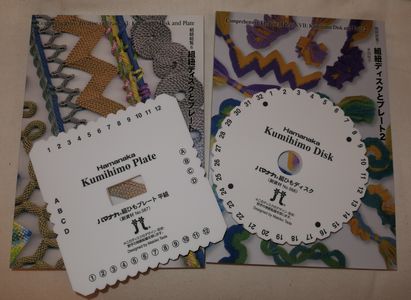 Makiko Tada developed several types of disks that are a fantastic tool to teach the basics of kumihimo, especially to kids. The disk replaces a marudai, the notches on its side hold the thread, and the threads are moved from one notch to another. Makiko Tada also developed patterns especially for the disks that you can find in her books (see below)

Braids are usually finished with tassels at both ends that are steamed to give a smooth finish (yunoshi). Tassels at the end of a sageo braids are small. The braid is flattened on a rolling stand (korokake): a flat piece of wood and a rolling pin.